Haig Altounian is a man of many stories, but I guess that’s a given when you’ve got a career spanning 40+ years working with some of the biggest names in the world of making things with wheels go fast – Roger Penske, Dan Gurney, Bruce McLaren…plus a few years as Steve McQueen’s personal mechanic. I recently got the chance to visit his shop and we connected the most over what he’s been up to since 1988 – restoring Vincents and other classic Britbikes. But his situation is about to change and he needs some assistance for the next chapter of stories to happen – can you help?

Can You Help Haig Altounian?
Photos by Nathan May.

If you’re not familiar with Mr. Altounian, here’s the short version of his story:


A quick his-story lesson.
Haig got his first job in racing at Shelby American in Venice, California, where he was part of the Cobra team in the early-mid 60s (while Shelby was making history with the GT40 in Le Mans, mind you). One of Haig’s projects was the Dragon Snake, a drag package for the 289 and 427 Cobras. 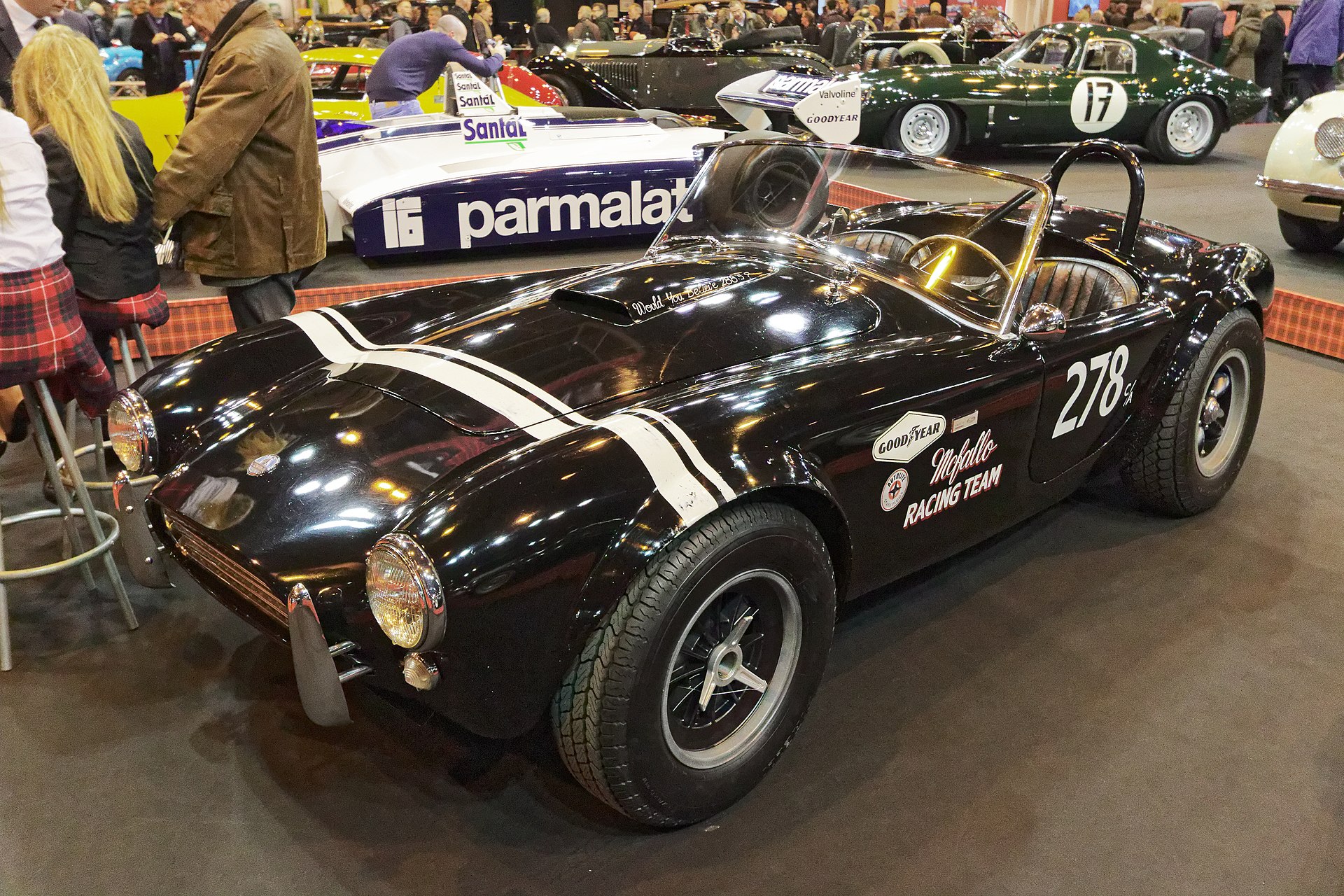 In 1968, he joined Bruce McLaren to support his Can-Am racer. The following year he worked on the Porsche 917 Can-Am racer, known as the 917 PA (for Porsche/Audi). Haig worked on the car piloted by Jo Siffert, an effort that Porsche started mid-season. Despite that, it placed 4th overall in the championship, and Porsche would soon take the Can-Am crown from McLaren in dominating fashion.

1970 took him to Solar Productions (Steve McQueen’s production company), where he was Steve’s personal mechanic. Haig’s got plenty of interesting McQueen stories, and he shared a couple of tales involving the filming of the movie Le Mans, including how Steve and Peter Revson entered the 1970 12 Hours of Sebring with a camera car (Porsche Spyder 908) and almost won even though McQueen had broken his left foot in six places while motorcycle racing just two weeks earlier and they were handicapped with a (relatively) slow car compared to the factory Ferrari and Porsche efforts.

When it came to Le Mans itself, the original plan was to race a 917 with Jackie Stewart, but Steve’s insurance company wouldn’t allow for it. So they rigged up a Ford GT40 and another Porsche 908 with cameras to capture footage for the movie. As noted on the Le Mans (race, not movie) site, the 908 had to pit every 15 minutes(!) to keep the three on-board cameras charged. The 908 camera car made it to the end of the race but it was not considered an official finisher as it didn’t cover enough distance. Haig was in charge of keeping all the vehicles running – he notes that the filming of the narrative portion of the movie didn’t happen until after the race ended, and he ended up living in Le Mans from June to November that year. 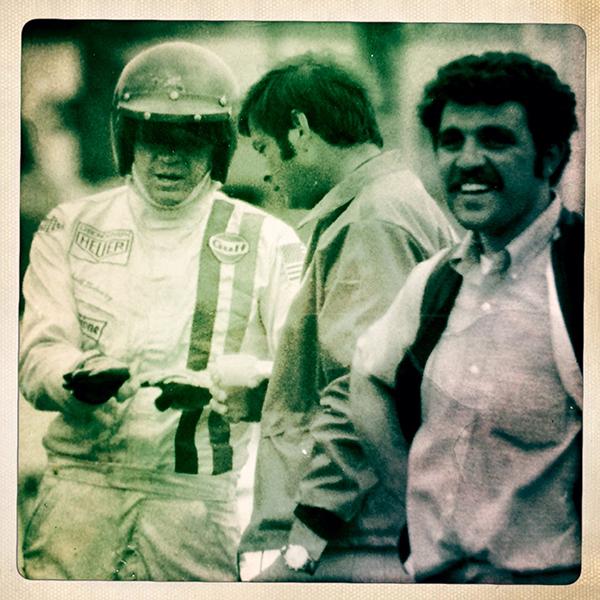 After Solar, Haig worked with John Wyer and the Gulf Research Racing Company Mirages. He then went to work at Penske at the end of 1972, and he hung it up in 1974.

From 1975-2015 he paid the bills by hauling refuse, but in 1988 he partnered with Richard Busby to create a Vincent shop run out of a 640 square foot garage in the back of a home in a quiet neighborhood in Culver City.

Fast forward a few decades, and Nathan and I are meeting him on a Saturday afternoon with the requisite social distancing. Haig’s shop is a blend between of classic bike heaven and a film scout’s wet dream: it was a hangout for Vincent enthusiasts in Southern California for years, and it’s packed with tools, parts, and amazing motorcycles in varying states of life.

Haig’s got stories spanning four decades, but I was most interested in what was currently in his garage. The first thing you’ll see is #637.

This started as a 1962 Matchless G50CSR, of which Matchless made just 25 examples for homologation purposes as they wanted to race them in flat track. This specific example was converted into a desert racer that was piloted by Clay Jacobson – the man who’s credited with inventing the jet ski. He was heading home en route from a day at the track when he had an accident, wondering if there could be a way to enjoy the sensation of riding without the risk of eating it on hard dirt or pavement…and the rest is history! The bike was then modified by Eddie Curl, a noted Matchless/AJS tuner, who equipped it with features like Barnes wheels, disc brakes, and custom alloy oil tank/fenders/megaphone. Eventually, this became the possession of Bud Ekins, who sold off some of the parts before this (and a few other of Ekins’ bikes) found its way into Haig’s care.

Another one of Bud’s former motorcycles visually dominates the space – a 1956 AJS Model 18 that’s on the lift. It’s currently for sale – Haig is entertaining offers around $16,000, and you may see it on Iconic Motorbike Auctions soon…

There’s also a first-year AJS Model 31 tucked in behind the lift, waiting for a detail before it also possibly goes for sale. The Model 31 (and its Matchless twin, the G12) was introduced in 1958 specifically for the US market. Knowing that Americans thought “bigger is better”, the Brits went with a 650cc motor.

Haig and his partner Richard (who unfortunately passed away in the early 2000s) have done bikes for Herb Harris, Wayne Griffith, and Jay Leno. He’s currently in the process of restoring a Vincent single, noting that a ground-up restoration takes him between 300-400 hours. He guarantees that it can be completed within a year – his portion is done much sooner, but he’s at the mercy of painters, chrome platers, and cadmium platers. Of the last two, he says they are “few and far between, and they’re disappearing.”

While I’m obviously most interested in motorcycles, Haig’s also got a lathe that’s worth learning about. This is a 1945 Sidney (which Haig calls the “Bentley of lathes“), which is notable for two reasons. First, it features zero-lash herringbone (double-chevron) gears. Second, it was originally purchased by 20th Century Fox Studios.

20th Century Fox used it to turn small generator armatures, and they sold it off in the 90s. Haig and his partner snapped it up, and now it’s part of the lore!

So, what’s the problem? After 32 years in the same location, Mr. Altounian has been told by his new-ish landlord that he’s going to have to move his shop. Thus, Haig is looking for options, and I’m helping him put out the word. Do you have (or are you aware of) some space that might serve as a new home for a motorsports veteran? Here’s what he’s hoping for:

Option 1
– 500-700 square foot space for himself
– continue with personal project and perform one last year-long Vincent restoration
– spend about 20 hours/week
– quiet, non-retail location with a garage or roll-up door

Option 2
– 2,000-2,500 square foot space for him and a few other Vincent owners who would go in with him for a larger space to store bikes and ideally have a small office.

Option 3
– Haig admits he’s not a social person (though he’s incredibly friendly and obviously has great stories), but if someone has a large collection of cars/bikes and wants a caretaker, he’d barter his services for space instead of wages.

No matter the option, he’s looking for something in or close to his home in Santa Monica, California and he’d like to be there for 3-5 years: “If I move all of this, I want to move it once.” Obviously there’s lots of little details that would have to be worked out, but that’s the general idea – are you able to help? Leave a comment below or email me: abhi@bike-urious.com.

Whether or not you’re able or interested in helping, I hope you enjoyed the read!

Bonus stuff for sale
To help fund the move, Haig’s selling off a few things like the aforementioned AJS. He’s also got a set of Amal 10TT9 carbs for a Vincent Black Lightning ($3,500) as well as a Vincent Amanda motor ($4,500), complete with mounting plates:

The best bikes for sale, and some good ol' motorcycle shenanigans.
Partner at @iconicmotorbikes, the greatest moto shop ever!

About to take the new @yamahamotorusa R7 out for a

It's very rare that I share a press release from @

Back in 2014, @unionmotorcycleclassics built a gor

Was drooling over a gorgeous resto-mod KZ1000 crea

This @ducatiusa 888 SP4 is one of the best bikes I

Testing the Honda Fireblade's wings for Wheelie We

When you’re a world champion and you want to sho