You may remember that a few weeks ago I had the wonderful opportunity of being on Jay Leno’s Garage so I could introduce Jay to Aniket Vardhan, a friend and a wonderful builder who has made a name for himself by creating a V-Twin engine out of two Royal Enfield singles. I know a lot of Bike-urious readers enjoyed Aniket’s story, so I thought I’d hit him with the usual questions for your entertainment. Enjoy!

How did you get started with motorcycles – how did you learn, and what was your first bike?
To be utterly accurate, the very first two-wheeled travel sans pedals was experienced circa 1992 on a Hero-Puch 65cc moped while visiting a childhood buddy in Pondicherry (south India). 2 speed, ridiculous fun and a semblance of a wheelie could be coaxed by positioning yourself all the way back. Weight not significantly more discernible than a heavy old school bicycle, no fear of laying it down.

Next step up was my elder bro’s Yamaha RX100 2 stroke, quite a cult bike back in India in the nineties and still has a diehard following.

Of course, once the mellow pulses of a 350 Bullet’s four-stroke fulfillment were experienced in my junior year at architecture school, it was all over. Or it began. I got one, spent far more time fussing with it than finalizing floorplans.

What’s your favorite piece of gear?
An old, weathered leather jacket from the 70s, smells of rockers, found in a London flea market.

Assume for a moment that money is no object, and importation laws aren’t a problem. What’s the next bike you’d buy, (can’t say a Musket!) and what would you do with it?
I’d have to say a 1936 BSA Y13 750 V twin. The most perfectly proportioned example of Brit V twin elegance.

Originally, they weren’t positioned as a machine for the wealthy, unlike the Brough and Vincent and that appeal to me. They are extremely rare however, with a mere handful surviving today.

What’s the most memorable motorcycle trip you’ve ever taken?
Probably the ride on the 998 to the AMA Mid Ohio Vintage Days two years ago. Seventy miles in the most furiously intense nonstop downpour I’ve ever experienced on two wheels. Could barely see ahead but the motor didn’t miss a beat.

Do you listen to music while riding? If not, why? If so, what are some of your favorite tunes to listen to while on the bike?
No music while riding, I would get carried away, distracted. I understand long freeway rides could get monotonous but my riding sticks to twisty backroads and hilly country. I also like to hear the sounds of the machine to stay in tune with what it’s trying to tell me. Honestly, my ride’s soundtrack is the varying rhythm of the engine.

Tell us about your inspiration for the Musket.
You want the long version? Get coffee for this, might put you to sleep.

It was a hot summer day in Delhi in the mid nineties. In a crowded market near home, I was on my bicycle, negotiating with ease the odd parked cow, rickshaws tinkling their bells, lazy dogs with lolling tongues and the cacophony that is unique to India. Amidst this familiar scene, my sleepy Saturday eyes fell on something that unknown to me at the time, was going to have a profound impact on the rest of my life.

It was a motorcycle. It wasn’t an Enfield- too long and low for that. The immediate impression was of bulbous massiveness and width. I swerved to a stop and squatted down next to it to take it all in. The
first, most major impact was the engine. It had two cylinders, which formed a dense, thick, finned “V” which completely filled the space enclosed by the frame and the exhausts made downward exits from the
heads and flowed into one beautiful muffler with a curiously shaped tail. The carb was in the center and the impression was one of symmetry but with a ‘forward flowing’ bias. It was painted in military
green, matt with a deep meaningful patina. It seemed to have soaked up half a century of history in the way the paint dulled in areas that had been touched often or were pointing upwards at the harsh Indian
sun.

I was absolutely stupefied. The biggest motorcycle I had ever seen was a 500 Enfield and while I’d seen pictures of V twins in books, never had one crossed my path. 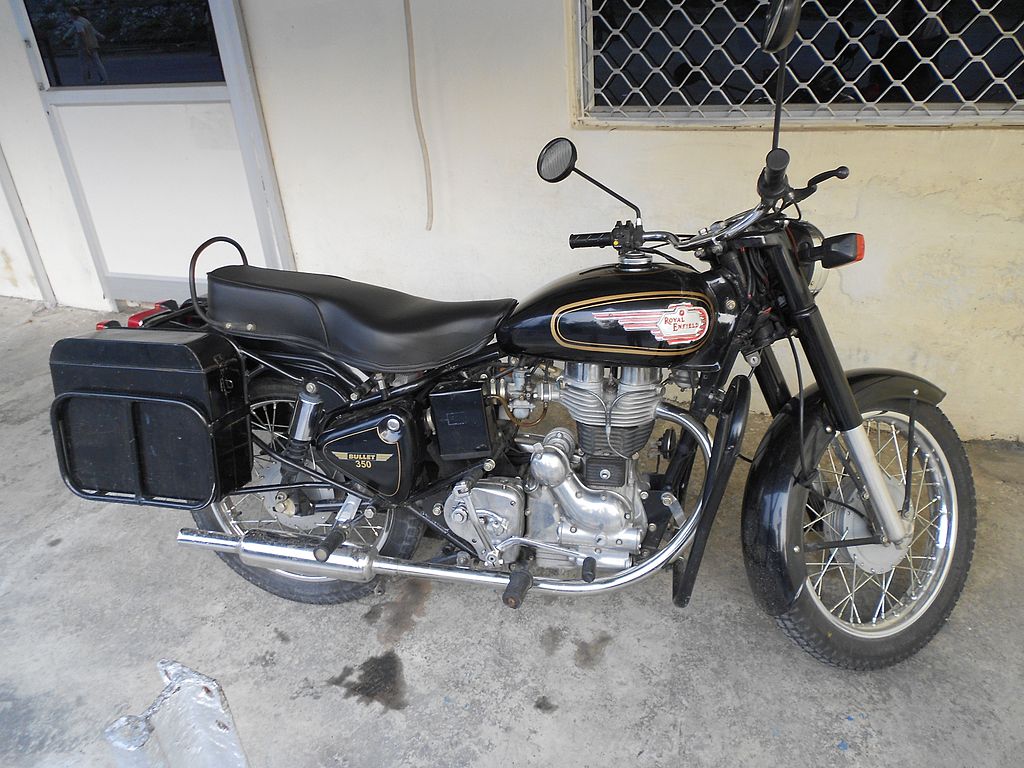 I hung around it for quite a while, pretending nonchalance. Eventually the owner walked up. Obviously enjoying the attention, he nodded. My naturally excitable self won over and I gushed explosively.

It turned out to be a 1942 Harley WLA. As we chatted about its history, I found my heart beginning to thump in anticipation of hearing it run. What would twice as many thumps as a Bullet sound like? He eventually put on his helmet, swung a leg over it and brought his posterior down on that plentiful saddle. Some short ritual probably followed, I’m hazy about it but he finally stood up and with his shoe on the kickstart, brought his weight down on it firmly. I remember this happened a couple of times with a very seductive sucking sound from the carb. And then, all of a sudden, it burst into life with this satisfyingly thick, bassy, meaty galloping sound. My heart was palpitating by now, I was giddy and quite beside myself.

After a few revs he let go of the throttle and it began to idle. And that’s when the sound that would take over my brain first made its pulsating impression on my eardrums.

I have to describe it.

There was this curious uneven space between its beats and it wasn’t until a while later that I realized why that sound mesmerizes so many of us who stop and stare when we hear an old V twin idle correctly.

That visceral sound is the closest that a mechanical contraption can mimic a human heartbeat. Our hearts too, sound exactly like unevenly spaced thumps. Go stick your ear on the chest of the adored one, confirmation is inevitable.

And here is the even more eerily appropriate metaphor. There were moments when it would rhythmically miss on one of the cylinders and the pulses became a “tug-a-dug, tug-a-dug”, which sounded exactly like
a galloping horse. Or, more accurately, the way small boys try to sound like one as they play, tugging at imaginary reins in the breeze.

Beating hearts and galloping horses…evoked by this magnificent steed of steel with history hiding in every nook. Sigh.

No surprise that I fell hopelessly and permanently in love right then and there.

[Editor’s Note: if you need a refresher, Aniket passionately told this story on Jay Leno’s Garage a couple of weeks ago:]

Why use the Enfield engine for your starting point as opposed to the multiple alternatives?
Well, I suppose it was the only candidate that fit the bill.

Visually, it was by far the most pleasing to my eye, those heads with the gorgeous kidney-shaped valve covers and beautifully contoured cooling fins ooze classic comeliness and the long-stroke, heavy-flywheeled momentum was just right for the brief. The rest of the scene back in India at the time consisted of two-strokes or the whirring little 100cc Honda four-stroke which didn’t fit the emotional bill.

With all of your experience doing something many people dream of being able to achieve, what would you do differently if you were going to do it over again?

Probably should’ve stuck to the regular full-time job, might be somewhat more sane today, ha! Seriously though, given the obsessiveness, I don’t know if I *could’ve* done something differently for my nature is to intensely mull over every design decision, trying to picture all the terrible extrapolations of ghastly mistakes, taking plenty time before setting it in stone (or metal). I should’ve left the 700’s gas tank narrow and stock instead of getting it widened to the proportion of certain pornstar’s chests. I could’ve gotten more bits fabricated rather than follow the ‘do it all yourself’ mantra but given the tight budget, it was a necessity.

What can we expect for the future of the Musket V-Twin?
The first run of 7 is a test to gauge the level and kind of interest this thing has and time will tell. A designer-craftsman of the caliber of Max Hazan choosing to build a bike with this motor is a tremendous privilege and I hope to hear from other custom builders who want to translate their own vision using this powerplant.

The other, more long term, unknown, unpredictable, unwieldy dream is to bring this project to India, it’s birthplace. That’s the core of the original idea, to build a V-Twin firmly and fondly based on a bike that is as iconic there as the Harleys are here. I get a lot of inquiries from there and unfortunately, the laws don’t allow custom motors or modified frames. I hope some legal light emerges at the end of the tunnel.