Yes, I know the Quail happened back in May. My bad.

In my defense, I got a few stories from the Quail right after the event happened:
The winners
The best dogs I saw
Mert’s Hands
My favorite bike at the show – the RoHorn Racer

But then I got caught up with the Kawasaki Versys 1000 launch (plus the ride back) and the Honda CBR/CB650R launch immediately after and I never got a chance to collect my thoughts about the overall show. In fact, it wasn’t until I made a reference to this year’s Quail during my San Antonio trip story that I remembered I forgot to share these photos!

So, this isn’t exactly breaking news, but I figured you’d still want to see some photos of great machines, right? Presented in a vaguely chronological order, here are some of my favorite bikes and moments from this year’s Quail.

Photos by Nathan May and yours truly. Assume the good photos are by Nathan…

The Quail opens up the grounds an hour early for media so it’s easier to get photos of bikes without too many people in the way. Where to begin?

The Chad Castle Family Private Collection had all kinds of cool military two-wheelers. My favorite was the bicycle of death, which probably isn’t the technical name but it should be. Grenades in a box hanging off the frame and dual anti-tank Panzerfausts hanging off the forks? Sure, why not.

Nathan doesn’t mind getting dirty to get a shot.

A common sight that day – Nathan takes a photo of something cool while I’m in the background, taking notes.

Nathan was a big fan of this Scrambler Desert Sled, even going as far to say “if I had a Desert Sled, this is what it would look like.”

Best hat in the show!

This year’s Featured Class was the 100th Anniversary of the Brough Superior. There were 10 bikes on display in the center of the lawn, 6 of which were SS100s. I also believe that 6 of the 10 were from Bryan Bossier of Sinless Cycles, but I’m not 100% sure about that.

A gorgeous case for a RotopaX.

Sinless brought my favorite of the Broughs – a 1929 680 OHV that ended up winning the HVA Preservation Award – I just loved the way the paint had aged.

Don’t get me wrong, though. I’ve got no problem with a little shine!

Before I left for the show, I asked Bike-urious readers if they’d be joining as well. Tony Norskog mentioned that he was showing a collection of four “odd boxers”.

He had a Zundapp K800, Douglas Dragonfly, Velocette LE200…and one other bike that I’ve forgotten because it’s been so long since the show happened! Oops. I think it was a Victoria V35 Bergmeister?

Tony owns quirky motorcycles and also happens to be an expert wine maker. That’s my kind of guy!

Excellent use of a sand trap.

I found the owner later, and he had a matching t-shirt.

Continuing the Honda theme, Sam Roberts of Ujeni Motors (left) cracks a smile while discussing one of his many CB750s.

Sam would have plenty to smile about that day – he’d end up winning Best of Show as well as the “50 Years of the Honda CB750” awards with the red CB below.

Friend-of-Bike-urious Ken Morris presents his 1968 BMW R60/2 to some judges. Also pictured are John Landstrom of Blue Moon Cycle in the rear and Tim Stafford (holding the red/white striped bag). Ken’s BMW is named Lucy, and it’s paired with a ’69 R60/2 he’s previously restored named Desi. Lucy would go on to win 2nd Place in the Other European category – seems fitting, as Desi won the same prize in the same category in 2017.

I’ve got a soft spot for this bike for selfish reasons, as it was on the cover of the first magazine issue where I had a full feature story. It was a piece on riding the Royal Enfield Himalayan into a mine – I also had a much more in-depth story here on Bike-urious. Forget all that and instead go to the website of the photographer who shot the cover, as he has some nice thoughts about the capture. 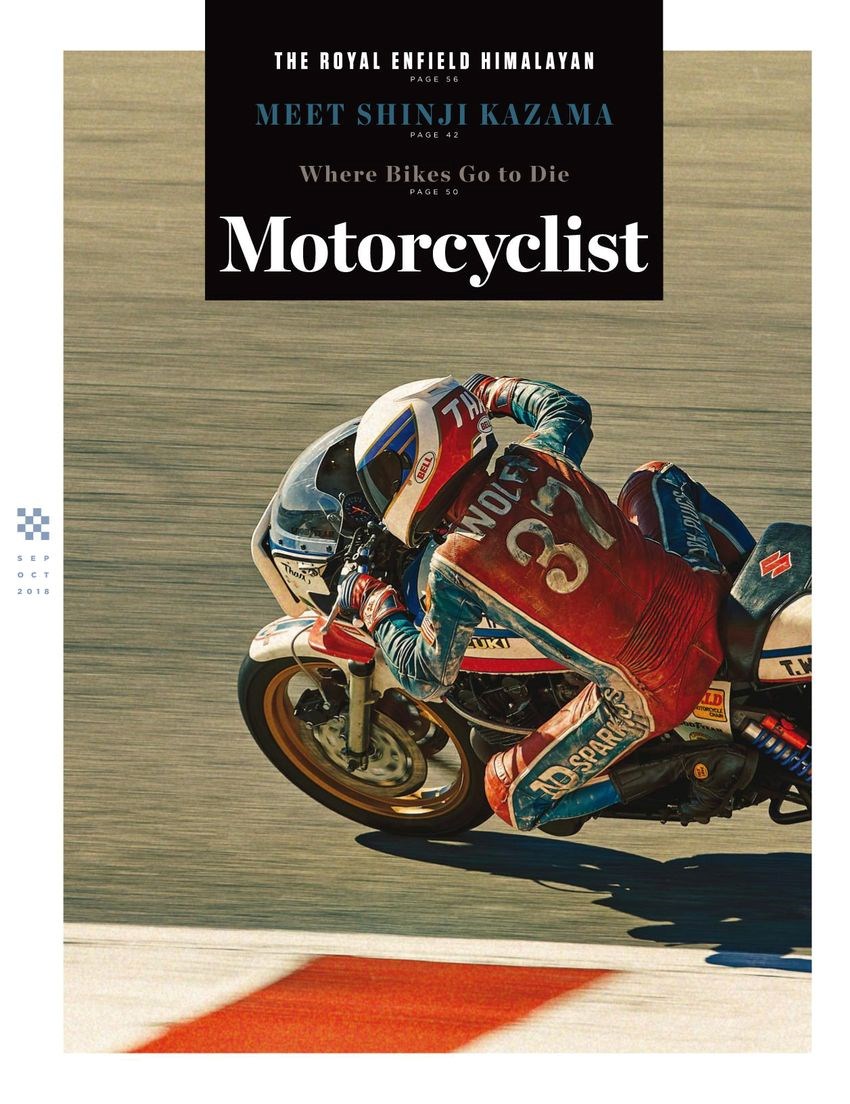 This CB550 caught my eye as it looks great in orange, but also because the buyer found it through Bike-urious! The new owner and I exchanged a few emails and I’ve been meaning to visit him, but I’ve let it slip (sorry, Scott). I hung around the bike for a while hoping I’d finally get to meet him in person but it wasn’t meant to be this time around.

This beautiful Jawa 652 ended up winning the “AMA Motorcycle Hall of Fame Heritage Award”. The owner is none other than Chris Carter, the the ISDT gold medal-winning badass who founded Motion Pro!

An interesting electric custom. I couldn’t find the owner to get more information.

As always, Moto Talbott showed up with some cool stuff. You may recognize this Mint Green tank as this custom BMW is currently for sale.

Moto Talbott also brought out this Capriolo Corsa 75, which was entrancing in deep orange.

Howard Yana-Shapiro has an amazing beard and a Buell S1 Lightning that’s setup for land speed racing at Bonneville.

You have to love the details – check out the added lip to scoop just a little bit more air in.

On the less subtle side, look at the spoiler on this turbocharged Honda Shadow sidecar rig!

It seems that some company decides to premiere a new bike at the Quail every year now. One of this year’s debuts was the second generation of the Lito Sora 2, a premium electric bike. I was very excited to see what they had in store, because old-school Litos are some of the most beautiful motorcycles I’ve ever seen.

Unfortunately, the current Lito, which is based in Quebec, has nothing to do with the original Swedish company except in name. That’s my assumption, because it’s very difficult to do any research on them – they don’t even have a website, the address just redirects to their marketing agency. The first generation Sora cost about $40k. This one is $82k, which means the price is almost as ugly as the bike is.

Another odd debut was next door by Harley-Davidson as they let people “try” the new LiveWire in a simulation with VR goggles. There was always a line for it, but I had no interest in trying a motorcycle like this.

Talking to JT Nesbitt about his design ideas (pictured in the background) for the upcoming Curtiss.

Another common sight at the Quail was me having a beer while admiring machinery. In the middle is our buddy Kyle Hyatt, who wrote a couple of stories here on Bike-urious and has since graduated to being a full time writer at Roadshow by CNET!

Somer Hooker checks out the Revival Birdcage. This was one of the first public sightings of the R18 motor that BMW will be using in their upcoming cruiser.

This lovely Rumi Formichino (Italian for Little Ant) was ready for a picnic.

Cycle World is often heavily involved with the Quail – this year they hosted a talk/dinner withy Peter Egan after the show. They also had a booth at the Quail, and that’s where I learned that the CW is selling prints of some shots that they’ve used in the magazine. One shot was called “Heaven on Earth” and it looked very familiar – it’s the Stelvio Pass in Italy and I was the rider in the red helmet on an Aprilia Shiver as part of this story with Motorcyclist.

Awesome display touch for this R90S.

This may be the best use for a Ural I’ve ever seen. This rig followed the Quail Ride the previous day to film participants.

This year’s recipient of the Quail Ride Award was this Bimota DB1.

Alright, that’s probably enough for now. Special thanks to Gordon McCall, the man behind the Quail Motorcycle Gathering (and plenty of other motorsports events). Gordon is very proud of the fact that there’s no typecasting at the Quail. “There’s everything from unobtanium to regular bikes. That’s who we are!”

I know this was a long one, but if you want more photos of cool bikes there are plenty more images in this album for you to enjoy. Thanks for reading!

The best bikes for sale, and some good ol' motorcycle shenanigans.
Partner at @iconicmotorbikes, the greatest moto shop ever!

Went out riding to test fit some @revit_official g

Go check out the @ogmotoshow today! I was there la

From a 1976 @motorcyclistonline review of the Yama

I wish the photos were better, but I still have to

I can't share my thoughts on the bike until next W

Wheelie Wednesday seems like the perfect day to sh